While the modern-rock radio play for Kid A’s ”Optimistic” has been solid, most observers, both inside and outside of Capitol, credit the company’s aggressive Internet campaign for helping the band scale new heights. And of course, in silent, officially unwanted partnership with the record company’s marketing efforts, there’s Napster. Armed with leaked lists of the album tracks, Radiohead fans assembled a replica of the album from live tracks as they surfaced on Napster this past summer. And the swapping was in full gear once the actual album cuts showed up on Napster three weeks before the album’s release.

On the industry-approved online marketing front, Capitol got roughly 1,000 fan sites and promotional partners like radio station Web sites to post ”iBlips,” pop-up Java-based pages easy to incorporate into a Web page. The iBlip included band art and photos, postcards and links to electronic retailer Amazon, which was collecting preorders for the album. (Kid A reached No. 1 on Amazon’s sales chart with more than 10,000 preorders.)

The promotion was ”viral” in the sense that it could easily spread when people mailed the iBlip to one another. And since the tool was traceable, Capitol could watch its progress. Capitol reports that the iBlips had a 153 percent click-through rate, which means that, on average, more than two people clicked on elements in each iBlip. Most Internet campaigns generate no greater than a 5 percent click-through rate. The tool also allowed Capitol to update the content of all the iBlips from central headquarters, thus enabling the company to add things like a stream of the whole record, which began three weeks before the release date and stayed live for a week. Listeners played more than 400,000 streams of the record, which could only be heard in sequence.

The album stream was also posted on a few choice sites, including MTV.com, Amazon and Heavy.com. Finally, Capitol upped the ante by using sites that skirted the edge of acceptable music trading. For three days, the company ran a promo with Aimster, a peer-to-peer swap service that trades files via AOL’s buddy lists. Aimster didn’t have any songs but allowed users to swap iBlips and share Radiohead-branded ”skins” designed to customize the look of the software. ”The band experiments and takes risk and as far as Aimster, we operated in that spirit,” says Robin Bechtel, head of new media at Capitol.

AN UNLIKELY ASSAULT ON THE TOP 10

Amid such risk-taking, Capitol’s marketers didn’t neglect to cover more traditional bases. Though Radiohead made no videos for Kid A, MTV frequently played 30-second video shorts provided by the band. And the album that wasn’t supposed to be embraced by radio programmers has had a kind reception over the airwaves. Los Angeles’s KROQ and New York’s WXRK both played the album start to finish. According to trade magazine Radio & Records, 67 out of 78 alternative stations have added songs from Kid A, and ”Optimistic” is No. 16 in the modern rock charts. ”It’s common wisdom that the record was radio-unfriendly, but since ‘Creep,’ Radiohead has never had a top 10 single on modern rock,” says Lott. ”But since ‘Optimistic’ is heading toward the top 10, does this mean that the album is the most radio-friendly thing they?ve ever done?”

But despite all the old-guard marketing and new-media innovation, Napster may have had the key role in whetting the fans’ appetite. The iBlip appeared on Angry Coffee, which until last week had a search engine that linked to Napster and other peer-to-peer exchanges. CEO Adam Powell says that he could see from his site’s traffic that people went to download tracks from Napster rather than stream the album through the iBlip once it became available. ”It’s not what Capitol wanted us to do but it all comes out to the exact same effect,” says Powell. ”The top pirated artists are also the top sellers, and Napster is key in building buzz.” Jonathan Moore, webmaster for the Lift, a Radiohead fan site says: ”I listened to the stream once, but I got the tracks on Napster quicker.”

When asked whether Napster boosted or harmed Radiohead sales, Lott was cautious. ”On my left hand, I’m working with the RIAA to get a just result in the Napster litigation,” he said. ”But in my corporate EMI right hand, I’m trying to sell as many Radiohead albums as possible. If I worried about what Napster would do, I wouldn’t sell as many albums.” Lott compared the situation to worrying about home taping in its heyday, when every college dorm had students with dual cassette decks.

Building in extra value to the albums is the only way Lott thinks that record companies can thrive in the face of file-sharing. Unlike the condensed, sonically challenged MP3 format, the Radiohead record demands a high-fidelity listen, preferably through headphones. And letting fans know that the packaging contained such extras as a secret booklet in the CD case also helped promote sales. ”Record companies need to provide a reason to not steal music on Napster,” says Lott. ”That’s by making sure it’s a great album and that packaging is really something special so consumers feel the need to buy the album.”

But even in a historic week for Lott’s Capitol, old habits die hard. In addition to Radiohead, the label had also pinned its fourth-quarter hopes on cheeky worldwide pop star Robbie Williams, whose new album, Sing When You’re Winning, was released here on the same day as Kid A. The results: Sing was virtually ignored, selling a gravely disappointing 14,000 copies. Where’s the iBlip for Robbie Williams?

They’re quite political and pessimistic (…) There’s stuff about war and death, death by nature, how we’re raping the earth. Stanley has a whole theory about an ice age that’s going to come and destroy the world – and that theme crops up in Thom’s lyrics. I think Thom shares a lot of his ideas with Stanley, so it’s all very inspired by what the songs are about
— Kenworthy (Shynola), Creative Review, octobre 2002
They go from Blair Witch to Captain Pugwash. Some of them are stupid – but the important thing is they’re meant to be throwaway, not works of art… they’ll just be on between Jif Micro Liquid and Volvo.(…) “It seems rather bloated to sit and watch a film for four minutes. With these, you watch them and go ‘what?’ and it’s gone. It’s a nice thing – you’re being briefly teased in a nice way.Eight or nine have been hacked out of a secure server at EMI that wasn’t really very secure: that’s a really nice way for them to go out. I love all this unofficial stuff: there’s so many Radiohead sites, and they do all the stuff we don’t want to do, like put up the news that fans are actually interested in. That leaves us free for our self-indulgent waffling.
— Stanley Donwood, Creative Review, octobre 2002

The Most Gigantic Lying Mouth Of All Time 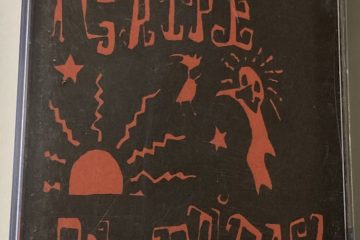