pic is of nice old Sunburst Strat which incidentally was wired by Mary in September 1955 – it’s odd to play a guitar such as this, knowing that it was around before the Beatles had even started out………………
— 4 décembre 2006 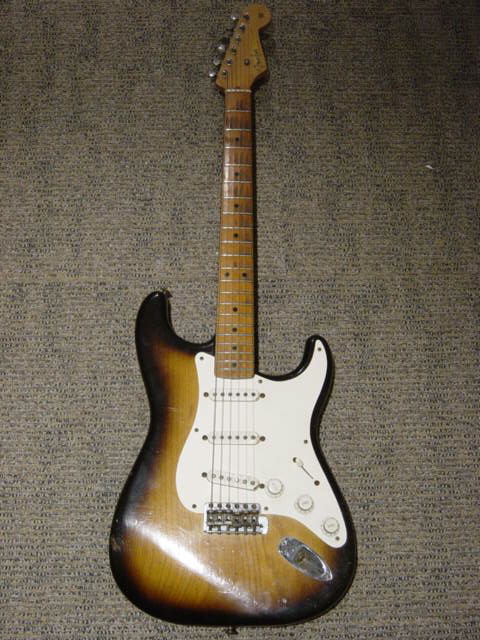 
A fair bit of time spent out of the cubicle today, dealing with paperwork, receipts and keeping up with the never ending equipment and PAT testing list, also checking out some more guitars, a ’69 black Les Paul Custom and I guess more notably, the old 1955 Strat – it’s only when you start to look closely at the old ones that you realise how many small differences there are between them all and the telltale marks inside that can indicate their true age. When dismantling and checking out the Strat, I found a small piece of masking tape stuck in the bottom of the control cavity with, ’ Mary 13th September 1955’ written on it in pencil.
In the early days, women were employed by Leo Fender to do the wiring and they would sign each one themselves…..I guess Mary would have never thought that 51 years later her name may be mentioned in an article on the internet, spinning around a world full of technology and many thousands of electric guitars of all shapes and sizes..,I wonder where she may be ?………….
The early necks also had the date written in pencil on the end, a few years later this would be done with a rubber stamp.
There are also serial numbers on the pots, all of these things can pinpoint fairly accurately when they were made and also that they are
the genuine article.
— 5 décembre 2006