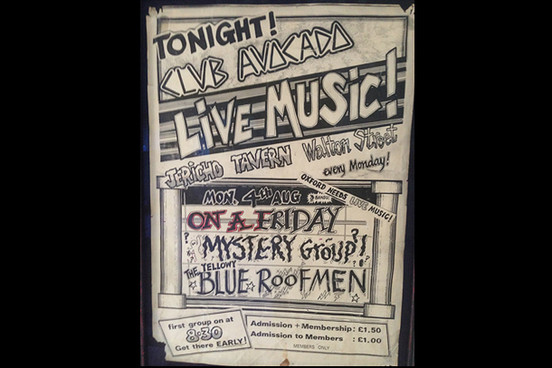 Avec On A Friday


Steve : “It’s Radiohead in the house or rather bassist Colin Greenwood’s
house. I’ve just walked upstairs from the living room where we’re
actually broadcasting from by the fire and the flight casts and upstairs
there’s a little room with… I can see a computer and loads of
keyboards actually two sets of keyboards and a bit of piano vibe [strums
on piano] can’t play, so there’s a piano there and then there’s vinyl
and CDs. Of course what’s the first thing you do when you go around any
pop star’s house ? You have a look a his CD collection just to check
first is this in alphabetical order ? Yes it is, it starts with “B“…
Jacques Brel, The Boo Radleys some Jeff Buckley and… so many David
Bowie records. I would say about 14 Bowie records there and as we move
along more CDs… and I think that’s a picture a Nigel Godrich and I
think that’s a picture of the rest of the band all wearing shades. On
the wall there’s a poster that appears to be for a gig by ‘On a Friday’,
so pre-Radiohead and I’m not sure what year this is but it says
“Tonight Club Avocado : Live music at The Jericho Tavern, Wolton Street”
Monday 4th August. The first band on was “The Yellowy Blue Roof Men”
what ever happened to them and mystery group in the middle and then On a
Friday headlining. Uh… there’s a bit of… Thom Yorke… come over
here, tell us about this gig. He’s run away… Colin… he’s run away
too… come in guys. So this is something you’ve had framed, is this a
very early gig ?

Steve : “Your first ever gig ?

Colin : “Well they were all the same band they just kept changing
their name we didn’t realise, we thought it was three bands but in fact
it was just the same group and we were there… it was us and them. I
sort of coloured half of it in which was a bit of mistake.