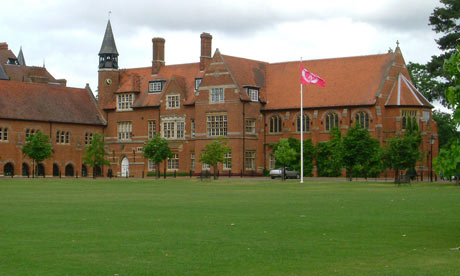 Abingdon has a history dating back to the twelfth century, but it is not an élite bastion on the order of Eton or Winchester. Its students tend to come from the Thames Valley region, rather than from all over England, and many rely on scholarships. The members of Radiohead were born into ordinary middle-class families: Yorke’s father was a chemical-equipment supplier; Jonny and Colin’s father served in the Army. They were, basically, townies – the kids on the other side of the ancient walls. Even at Abingdon, they felt out of place. The headmaster of the school, Michael St. John Parker, cultivated a pompous manner that many alumni – not just Radiohead – remember less than fondly. Parker is still in charge, and has described the school spirit in these terms: “Competition is promoted, achievement is applauded, and individual dynamism is encouraged.” In schools of this kind, many students gravitate to the art, music, and drama departments, where the sense of discipline is looser.
— Juice 2001 Yearbook

Still, when he was young he could see well enough to ride a bike, and he was a good gymnast until his teenage years, when he took up smoking. He went to a public primary school, and then a private high school, Abingdon, along with the rest of Radiohead. His friends at home rejected him because he went there. “They blanked me out. I used to cycle around, and one of them once got his older brother to kick the shit out of me and throw me in the river, just because I’d gone to that school.
— Blender, septembre 2003

Yorke’s aggression would play out in more constructive ways after his difficult stint at a boarding school in nearby Abingdon, where he was picked on and frequently engaged in fistfights, which he usually lost.

THE FIVE MEMBERS OF RADIOHEAD ALL MET AT A PRIVATE  boys’ school in Abingdon on the outskirts of Oxford, run by a man Thom maintains was a “power-crazed lunatic who banned music and walked around in robes impersonating a bishop”.
— Select, avril 1995

“I was a sort of leper at the time,” Yorke recalled, “and he was the only one who was nice to me.” Yorke was born with his left eye paralyzed; in his childhood, he endured a series of not entirely successful operations to correct it, and the oddity of his half-open eye made him a target for bullies. Tougher than he looked, he often fought back, but he preferred to disappear. “School was bearable for me because the music department was separate from the rest of the school,” he said. “It had pianos in tiny booths, and I used to spend a lot of time hanging around there after school, waiting for my dad to come home from work.” Other members of the band also studied with Gilmore-James and were encouraged by him. “When we started, it was very important that we got support from him,” Colin said, “because we weren’t getting any from the headmaster. You know, the man once sent us a bill, charging us for the use of school property, because we practiced in one of the music rooms on a Sunday.”

The yen for freedom in Radiohead’s sound owes a lot to Gilmore-James, who immersed his students in twentieth century classical music, avant-garde music of the postwar era, classic jazz, and film scores. Once, he had the school orchestra perform Richard Rodney Bennett’s score for Murder on the Orient Express while the film was playing. He left Abingdon in 1987 to devote himself to the legacy of his father-in-law, the Welsh composer Mansel Thomas, whose music he is editing for publication. “I watch over Radiohead much as I watch over my children,” he said in a phone call. He spoke with the fastidiousness of a lifelong teacher, and yet his tone was enthusiastic rather than dogmatic. “They were all of them talented boys, in the sense that they had more than average abilities to think for themselves. I was of a different generation, and I did not always grasp what they were after, but I knew that they were serious. And they were delightful to be around, always getting carried away by their latest discoveries. Whenever I see them” – his voice became firm – “I tell them that they must continue to pursue their own original line.”

Nigel Hunter, Yorke’s art teacher at Abingdon, says the aspiring rocker was strong-willed even then: “He was very independent. He wasn’t someone who was swayed by a crowd.” 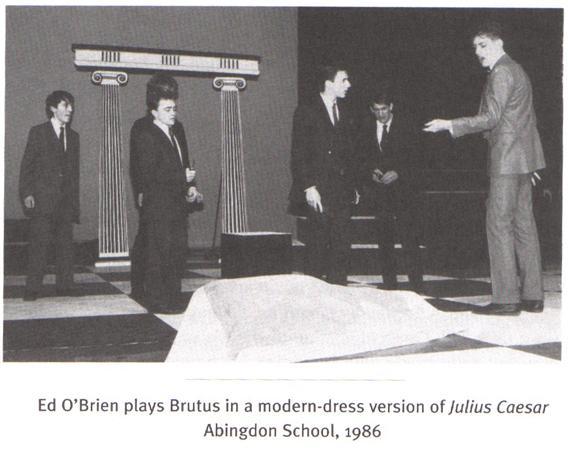 Thom Yorke was, unsurprisingly, something of an odd child. When he was eight he was given a small Spanish guitar by his mother. He immediately had a revelation: Yes! A guitar! It was the future! He would be the next Brian May! Fame, adulation and outlandish curly perms would be his! Sadly, all he could play at the time was ‘Kumbaya’.

At the age of ten he formed his first ‘band’: Thom played his ugly homemade electric guitar, while his friend preferred to concentrate on making weird noises by dismantling old TV sets. Intermittently, the TVs would give his sidekick severe electric shocks. Mates would stand around and watch. Two years later, Thom joined the school punk band, TNT, and stepped in front of the microphone for the first time. No one else wanted to be the singer, so he thought he’d try it.

“I started singing into this little stereo mike tied to the end of a broomstick handle. Everyone just started falling about laughing, and that was that. That was my introduction to singing.”

As 15-year-olds, Colin Greenwood and Yorke weren’t friends, but they crashed the same parties. Greenwood wore unitards and listened to Alien Sex Fiend; Yorke wore thrift-store suits that his mother altered to fit him. “We’d turn up at parties, and he’d be in a cat suit and I’d be in a sharp suit,” Yorke says. One time, with friends, they left a party drunk and decided to play chicken by lying in the middle of the road to see if cars would stop. The first vehicle that approached was a police car. They didn’t play again.

Yorke found the parties hard. He had hit puberty young, at 11, but Abingdon School was for boys only. “Going to single-sex schools is damaging, and it takes a long time to sort it out,” he says. “Because you want to get some action, and you can’t get any. And when you do, it’s fucked up. I used to go to these parties because I wanted to get into trouble and meet girls, and that’s where you go, but it’s such a ridiculously pressurized situation. I’d get [drunk] out of my mind and then take charge of the music: ‘Fuck the lot of you; we’re listening to Joy Division.

Once he realised that the other members of TNT all had bigger mouths and bigger egos than he did, he began stalking the corridors of the school in search of the people to make up his own band.

“I formed it with Ed (O’Brien, guitarist) because I thought he was cool and looked like Morrissey; and with Colin (one half of the Greenwood brothers) because he was in my year and we always ended up at the same parties. He’d be wearing a beret and a catsuit, or something pretty fucking weird, and I’d be in a frilly blouse and crushed-velvet dinner suit, and we’d pass around the Joy Division records. I sympathised with him for being in TNT after I left, so I told him he could join if he played bass like Peter Hook. He never did.”

Their love of Joy Division united Radiohead, along with their worship of the Smiths and R.E.M. O’Brien was recruited because he looked like Morrissey.
— Blender, septembre 2003
At Abingdon School, outside of Oxford, Thom and Colin were in the same year. They used to crash the same parties, Thom wearing a dinner suit, Colin a body stocking and a beret. Phil’s buddies — they were two years older — used to beat them up. Colin met Ed on a school production of Gilbert and Sullivan’s *Trial by Jury*. Thom had wanted to be in a band ever since he got tired of Lego blocks, so he got the others together to play everything from ska to country.
— Details, novembre 1993

Way back at Abingdon School he was in Colin’s tutor group. He thought Colin and Yorke stood out for “obvious reasons” and joined their outfit On a Friday, wanting them to be like Orange Juice or U2 or Echo and the Bunnymen.
— Q #204, juillet 2003

The first thing Thom ever said to Phil the drummer was, “Can’t you play any fucking faster?”(…)“YES. I DO REMEMBER THE FIRST WORDS THOM ever said to me,” laughs Phil Selway (…)“I soon learned to play faster.’
— Select, avril 1995

Although as yet they didn’t know each other, music was a means of escape from the rest of their regimented schooling. “When you‘re at school you get into a band and you get to be kind of a cool person in your year.” – Phil. Whenever possible, Thom, Jonny, Ed, Colin and Phil used to retreat to the music school where they could experiment and create. They took their first influences from bands around at the time such as Magazine.
— Answerphone début 1995
Though the five didn’t know each other that well, they began meeting up in the school’s music department, which Yorke describes as “great-no one came down there, and there were these tiny rooms with soundproofed cubicles.” Colin remembers Abingdon’s music school as a place “where we would all run and hide away from the tedious conformity of timetables and uniforms.”
— Guitar World, avril 1998

Is it true that your headmaster at Abingdon once sent you a bill for usin the school’s music rehersal rooms at the weekend?

COLIN: Yes, he did. Sixty quid! We used the upstairs music room on a Sunday for a rehearsal and he sent the bill to Terry. So Terry went to see the headmaster in high dudgeon and tore it up in front of him. What a stupid thing to do! Not ripping it up, but sending it in the first place.
But it’s so ridiculous, isn’t it? What was good for me about our old school was we did all the plays and after-school stuff, and you learnt how to work with other people in an organised way, and make things happen that weren’t on the curriculum, for yourself. I think that was really good for us as a group that we were able to carry on that energy and use it for ourselves.