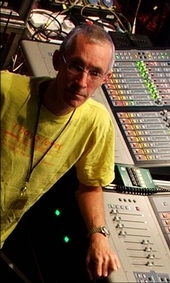 Monitor world is presided over by the unflappable Graham Lees, who mixes with a Midas H3000 console and a 16-channel stretch, using all 56 inputs. He’s also sending selected bass and guitar signals to the video at strategic moments. The wedges are all Firehouse, because they are « the best », according to Lees. Thom Yorke, Ed O’Brien (guitar) and Phil Selway (drums) are all on custom-made Firehouse IEMs, and they also use wedges, whereas Jonny and Colin Greenwood use just wedges – and ear defenders !

They all think carefully about what they want to hear, said Lees, which could potentially make his life very complicated, but it doesn’t because of their audio eloquence and their ability to communicate exactly what they want to hear. Since the summer, they’ve used a scanning system based on ham radio technology for the IEMs, that shows a graph of all the FM radio activity in the area, so helping to avoid busy frequencies, and saving a lot of time. It proved particularly invaluable on the festival circuit.

The only effects Lees utilises are two reverbs, and that’s usually only for outdoor shows. He uses a fair amount of compression on the desk to hold the relatively ’fluid’ set up in place. “

Graham Lees: Not especially. I do have a lot of equipment on stage admittedly, but a lot of the channels on the two Midas consoles are for specific songs. There are 56 channels on the deck feeding a combination of in-ear monitors (IEMs) and wedges. Thom [Yorke] and Ed [O’Brien] both use in-ears, but they use them in a way that’s a little different. They’re not monitoring very loudly and the IEMs are partly being used to reduce the on-stage volume. Thom and Ed also have wedges in frontof them, as do the rest of the band, so I’m feeding them a combination of wedges and in-ear monitoring. For example, Thom’s hearing all the drums and guitars through his wedges and he’s hearing the acoustic guitar and voice through his in-ears for clarity and pitching as much as anything else. This combination keeps things fairly live so he doesn’t feel too cut off from the environment around him.
AS: So the feed to Thom’s in-ear mix only includes half the sounds? There’s no drums or guitars at all in his in-ears, is that right?
GL: That’s right.
AS: Does this combination have any drawbacks? It instinc tively feels like that approach might be fraught with phase and spatial problems?

GL: Not really, no. Initially I thought we’d have to start employing delays and such-like but we just kept it very simple and it works. In my experience most of the problems with monitoring are caused by excessive levels, but Radiohead’s stage levels are quite low – there are no ferocious levels out there, which makes my life much easier.

AS: Presumably the in-ears stop everyone wanting to turn their levels up and up. I suppose the benefit is that each person can monitor at his own level without it affecting everyone else…

GL: That’s right, and the benefit is that everything is very, very controllable on stage because of the low levels – the possibil ity of feedback is almost nil, so I can use the equipment at its optimum. I’m also using these fantastic wedges from Firehouse Productions in New York, which I personally feel are the best wedges ever developed. I can run them almost flat – the XTA graphic EQs I have across them are almost superfluous now, that’s how good they are.

AS: Is this ‘split’ mix that you’re feeding Thom and Ed consistent throughout the gig?
GL: No. For certain songs I put everything in Thom’s in-ears because he’s moving around the stage away from the wedges. There are different times throughout the gig where that’s likely to happen, so for those songs I switch to a different mix, which we’re both aware of in advance. Thom knows when I’m switching over so there are never any rude surprises.
AS: Radiohead is hardly what you would describe as a ‘conventional’ band in many ways. How has the band’s on-stage setup evolved? Has the system been built collaboratively?
GL: We’ve all had a say in how the system’s evolved. We set up just over a year ago in their own private studio in Oxfordshire, where the band rehearses and records its albums. We sat down at that time and just built the system up slowly and organically. We started with the basic drums, guitars and bass channels and went from there, developing the system as we went making choices about everything from wedges to microphones. As the band introduced a new song to the potential set – they can choose from nearly 70 – I’d introduce a new channel here and there to accommodate the song’s needs, rather than create an inflexible system that would make performing the songs difficult in the live situation.
AS: Was that a messy process or a fascinating one?
GL: Well, it took quite a while: we were in rehearsal for a month doing that. But it’s the only way to do it because the guys play so many different instruments, and the songs are so varied from one to the next, that no static monitors setup could possibly accommodate them. When you’re working with so many channels, one of the important things is to avoid getting bogged down at soundcheck. So, for instance, Jim Warren has chosen mics that work hand in glove with the sounds, so neither of us have to do much in the way of EQ’ing.
When you push up the faders the tone of our sounds is pretty close – we attempt to keep the channel EQ as flat as possible. So if we need a bit more top end on the guitar, for example, we’re more likely to change micro phones than go diving into the EQ.
And the monitors setup also provides sends between the band members as well, which is unusual. For example, on certain songs like Sit Down, Stand Up I’m sending the piano to the guitar effects, and on Everything in its Right PlaceI’m feeding Thom’s lead vocal into another effects box on stage so that Jonny [Greenwood] can modify it on-the-fly. Jonny’s sampler is recording and playing back ‘live’ samples of
Thom’s voice as they occur via the foldback system. If something goes wrong with the foldback, Jonny won’t have anything to sample. So that type of thing is a slightly unusual role for monitors to play.
AS: There’s a lot of guff spun about Radiohead – who they are and what they think. Are they an easy group of guys to work with live?
GL: They are. They’re great communicators and they’re very knowledgeable about the gear. Anything to do with monitors is all about communication really: and they have the technical vocabulary to explain to me exactly what they want. We just sit down and talk about the best way of approaching things. At times it can get a little complicated as different songs add to the list of specific monitoring tasks I’m required to perform, but it’s my job to cater to the band’s needs and each song’s peculiarities. It’s an organic process, and it grows all the time
— Audio Technologie, Radiohead Live, #23 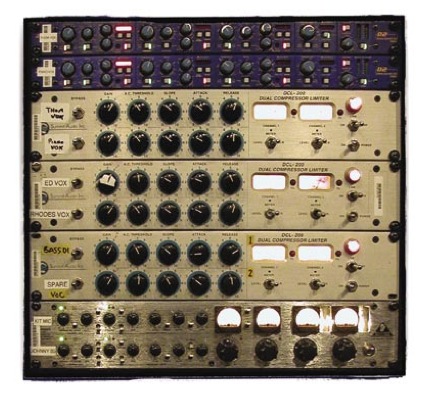 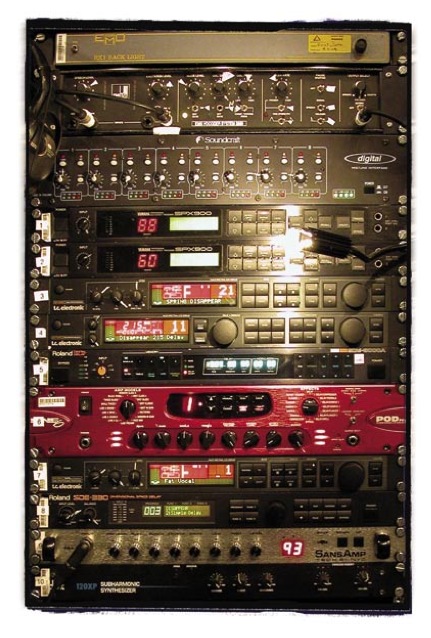