Opening the show — almost co-headlining, considering that they get much more radio play than PJ Harvey — were Radiohead, whose “Creep” has become an anthem for the latest generation of disaffected adolescents.

If their single defines Radiohead as the prototypical art school band (“angst music for angst people,” as they themselves say), their live show is far more aggressive. Less Cure, more Cult. Much of the material sounds suspiciously like early ’80s power pop run through the Distort-O-Master.

Fronted by elfin Thom E. Yorke and boasting three (count ‘em) guitar players, Radiohead tore through a 30-minute collection of potential singles — none up to the level of “Creep,” which really is the best song Peter Murphy never recorded.


Radiohead, riding high on the success of the single “Creep” (which is winning cultlike devotion among the alternative nation), delivered a universally bland set.

With the exception of “Creep,” Radiohead songs — like “You” and “Vegetable” from their Capitol debut “Pablo Honey” — certainly come across better on record. The band’s often mellower material just doesn’t carry live. However, the slashing guitar in the song “Creep” does show marks of brilliance. 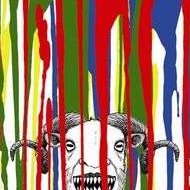