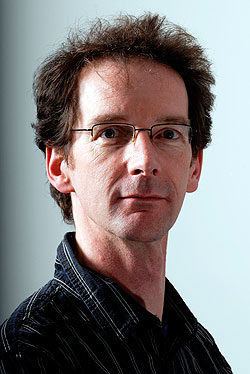 Monitor engineer David “Tree” Tordoff has been with the band since the last leg of the promotional tour for The Bends in the mid-’90s. For the U.S. leg of this tour, he began mixing on a Midas Heritage console, which was choosen for its automation features.
— Mix Online, octobre 2001 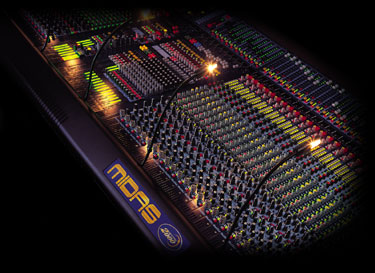 Singer/guitarist Yorke and drummer Selway are the only two members of band using in-ear monitor setups, dual-driver Firehouse 6500 ear molds and Shure PSM 700 beltpacks. The rest of the band listens to standard wedges from Firehouse, which also supplied all subwoofers. “Thom has ears and wedges,” Tordoff explains. “The wedges are used purely for the electronic drums and instruments that Jonny Greenwood plays. He doesn’t like those sort of threatening noises in his ears. And Phil, the drummer, has ‘ears’ and a stool shaker and takes everything in his mix. The bass player has normal wedges and a sub as well, because he also plays upright bass, and you get a bigger sound out of that. Everyone else is on standard wedges.”

For effects, Tordoff uses PCM 70s for vocal reverb on Yorke’s in-ear mix. And dbx 1000 compressors are used on all of Greenwood’s instruments, including guitar, an elaborate patchable synth array and various other items.

“One big change for this tour is that we have an acoustic piano onstage,” Tordoff continues. “And if you put an acoustic piano in the middle of the stage, it changes everything! And we have the upright bass as well. It’s more interesting with challenging instruments. And more things move. We’re wheeling keyboards around all the time. So everything has to have a long umbilical cord running to it. It is a huge input list, but only half of it is being used at any one time.”

For sidefills, two Turbo Floodlight cabinets were placed on towers at either the side of the stage, approximately 12 feet off the ground and angled downward. To make these particular speakers fit in with the rest of the stage, which reflects the bleak, neo-futurist themes of the band’s music, the cabinets were stripped of their blue, composite-wood housing, exposing the internal components. To the untrained eye, the unfinished metal drivers more closely resembled a work of contemporary sculpture than a speaker. “At these open air shows, it is sometimes hard to fly things, and this was an easy way to get them in the air,” notes Tordoff.

“Radiohead is always interested in hearing,” he continues. “The guys that don’t use in-ears wear in-ears with filters, because it’s all about keeping the stage volume down. When they first got signed and realized that they might have a career in music, they all anticipated that it would be for 30 or 40 years. It was a decision from the beginning to be very careful with their hearing. A lot of my job is keeping things quiet, as opposed to being very loud. Many monitor jobs are about making it very loud and exciting. For them, it’s very much about getting the mix exactly right, which you really can’t do at top volume. To make the show more exciting, they have to play better and not rely on just volume and noise.”

“One of the top monitor engineers in Great Britain, David “Tree” Tordoff has spent much of the past six years working with the great British band Radiohead. He’s also done monitors for UK acts such as Lloyd Cole, John Cale, Supergrass, Marillion and others. As of their most recent tour, Radiohead are using IEMs on singer/leader Thom Yorke and drummer Phil Selway, and wedges on the rest of the band, a combination that seems to be working well so far. In this case, both the wedges and the in-ears were supplied by Firehouse Productions: The IEMs are the highly regarded dual-driver Firehouse 6500s, used in conjunction with a Shure PSM700 beltpack.

“I went through a long process before arriving at the Firehouse in-ears,” Tree explains. “We tried various models over the years, and Thom Yorke finally settled on certain characteristics he wanted. We felt that dual-driver ones all sound better than single-driver ones. He preferred silicon material to acrylic, because he wanted something slightly softer. And he wanted the shape to be the larger kind, so it held more solidly in his ear. He finds that as he performs, he gets hot and sweaty, and, if it’s not the larger shape, it starts to unscrew out of his ear. Anyway, no one seemed to be making something with those three characteristics. I was moaning about this to Bryan at Firehouse, and he suggested we try his Firehouse ones. Technically, it’s acrylic, rather than silicon, but it’s a softer, smoother version, and Thom thought they were fine.

“I think one of the most important things about in-ear monitors is that they should fit properly and give you a measured isolation so you’re actually listening to the in-ear monitor and a fixed mix of other sounds”, he continues. “You can have ports and things like that, but it must be controlled. If it’s a bad fit, the mix of in-ear sound and leaking sound is never the same from day to day, and you don’t have a consistent environment, which makes it very difficult to mix for. With some of these systems, it’s like listening with the door banging open and shut and the outside noise coming and going. So, the fit is really important, and the best way to get them to fit really well is to use the softer material and a larger mold. For someone like Celine Dion or Kylie Minogue, you might want the smallest, most discreet ones you can get, but if you’re in a rock band, it probably doesn’t matter as much. I know the first ones Thom ever ordered, he said, ‘Oh, can I have them in green?’ He doesn’t care if people see them. But different people have different priorities.

“Ed O’Brien, who plays guitar and does backing vocals, had a phase of using in-ears when he was very worried about singing backup vocals. It’s hard to sing backup vocals for someone like Thom Yorke, who’s such a good singer and expects the very highest from everyone around him. I think Ed was lacking confidence, and the in-ears helped him a lot with his singing. Nevertheless, he eventually felt he couldn’t hear his guitar amp properly and that’s his primary role in the band, so once he’d spent a year using IEMs and increased his singing confidence, he got rid of them and went back to listening to his amp and singing with wedges again. With in-ears, you always win on the hearing of your own voice, but you always kind of lose in hearing the instruments, particularly if you’re a guitarist; guitarists always feel like what they hear from the amp is the real sound of their guitar, not what’s coming through the P.A. or the wedges. And in the case of in-ears, it’s even further removed from the real sound of the amp. To me, it sounds fine, but to the guitarists, they hear more subtleties from the amplifiers.”

Actually, Thom Yorke uses a combination of IEMs and wedges. “He uses the in-ears for his voice, but he has all the drums and certain other instruments in the wedges. There are certain things he doesn’t want to hear right in his ears, like [keyboardist] Jonny Greenwood for example! It does eat up mixes, though: Yorke and O’Brien use four each [for stereo ears and wedges and reverb sends], and Phil Selway uses three [for stereo ears and stool shaker].”

On the issue of stereo vs. mono for IEMs, Tree comments, “Some people think that doing them in stereo is a waste of time, but I think it’s quite useful to separate things left and right. Obviously, if the singer turns around, the left and right image doesn’t change with him, and it can be a little disorienting. I don’t think you want to necessarily pan things spatially to match things on the stage, but I’m a firm believer that if you put the guitar on one side and the keyboard on another, you can psychologically mix the two things yourself in your head if you hear them coming from a separate place, and that gives the singer more control. Others say if you do it in mono, you get a stronger radio signal, because the two channels back each other up and all that, but I haven’t had any trouble with that. The stereo obviously gives you a little more space to work with, and that’s important when you’re talking about putting sound directly in a person’s ear. It’s more natural that way and, I suspect, easier to sing to.”

David ‘Tree’ Tordoff had been a colleague of mine for many years, firstly in his role as an enthusiastic student at Oxford Polytechnic, running the union PA system, and then working together at a local rental company, Tiger Hire. In later years, it was as a teacher that I came across Tree more frequently.

When I parted company from Radiohead, it was Tree (pictured taking a class) who took over my role as monitor engineer, a job he did for many years. However, at some point the pressures of touring must have taken their toll, as he returned to education – a fact I only became aware of when I was giving a guest lecture with ‘Big’ Mick Hughes. We had been asked a particularly challenging question, to which I believe Mick had replied: “You would need to be a physics teacher to explain that!” “Which, luckily,” Tree announced, “I am!” He then proceeded to give a very thorough explanation of the relevant laws and theory, leaving Mick and I silent on the sidelines.

Tree later went on to work for Yamaha, providing technical support and, most importantly, teaching students and professionals how to use Yamaha products. I have attended several of his lectures and they were as entertaining as they were informative. His knowledge was huge, and because he had worked at the highest level, he could explain things in a relevant and practical way.