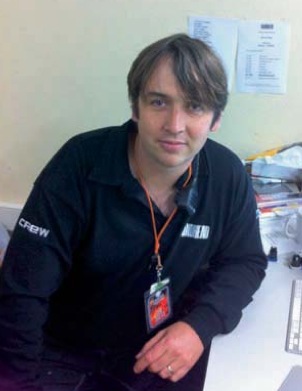 I was working for Tiger Hire, who did the audio for Radiohead at the time (=1993). In 2001 I filled the position of Stage Manager, they’d never had one before. Then in 2003 the TM retired and I started as their Production Manager,” he said. Young has also worked with Pink, NIN, Dido, Duran Duran and Will Young as a PM, but it was Radiohead who gave him his initial break in the role.

I was already known to Radiohead and they’re very loyal to their crew; we’ve got people still working with them, from when they were a gigging pub band 20 years ago. Because I knew everybody, it was quite a gentle transition as I didn’t have to form new relationships, but on the other hand, it was difficult because I had to establish myself in a senior role. I felt that I did that after I did my first Radiohead tour as their Production Manager in 2003, and then went away to work for other bands, returning for their next tour in 2006. It was a lot more comfortable because I’d learnt my craft and gained experience


« Like many of the crew, he’s worked with Radiohead for some time, stepping into the production hot seat earlier this year, when vacated by Brian Ormond who’s now tour managing. Battling a heavy cold, Young explained that a major scheduling move was to bring the get-ins forward to 11 hours before doors – usually 6am – this time around. This is to ensure enough time to get the lighting in place, and that all other departments can achieve what’s needed in as stress-free a day as possible.

He’s also instituted a strict health and safety regime on tour. A personal passion, he saw this as the ideal opportunity to put his money where his mouth has always been on this important topic, and “persuade people that it’s not a huge or costly effort” to create a safe working environment. All crew are required to wear hard hats and high vis jackets whilst working in the arena. They’ve also increased the documentation requirement from their suppliers, which they in turn supply to the venues.

Certain companies – lighting supplier Bandit Lites UK being a good example – have always led the way in the documentation stakes, and it’s interesting to see the concept now becoming more commonplace on tour. Generally the tour’s health and safety practices have been well received, said Young, especially by the local crews who often take their lead. Young has 38 touring crew, six trucks and four buses to manage on the Euro leg of the tour in addition to the gruelling schedule. Lighting designer Andi Watson continues to bring his very unique creative and mercurial talents to the Radiohead mix. Definitely in a league of his own in this specific art form »

the second day there was overshadowed by the truck drivers strike going on in Spain and the border being blocked, a massive headache for production department having to make plans A- Z with everything changing every five minutes….eventually we resorted to various unconventional ways round the blockage which involved being up all night and splitting up gear and personnel……..

Stage Technologies has been contracted by Radiohead Production Manager Richard Young and Richard Kent of Aerial Rigging Techniques to provide a 60 axis “pod” system running 12 free flying video screens on the Radiohead tour in Europe, New Zealand and Australia this autumn. Following a well-documented roof collapse earlier in the summer the tour’s automation system had to be replaced. Despite being in the midst of its busiest year to date the Stage Technologies rental team created a new bespoke system within 30 days.

Stage Technologies provided control for the band’s existing winch system including: 10 AU:tour control racks, a 60 axis system, plus new motor looms racks, desks and programming tools.  Each pod in the system contains 4 point hoist winches each lifting a corner of the screen. Each is able to rotate to create multi-dimensional movement within the screens.

Stage Technologies Head of Training Alex Hitchcock, who managed the programming for the project, said “The Radiohead tour is a great example of what Stage Technologies can turn around in a short space of time. Creating the system and ensuring it was at Elstree studios in time for rehearsals was going to be a challenge but our team met it brilliantly.”

The band has a catalogue of 90 songs, each of which has any combination of 27 “presets” or looks for the screen positions; and each night of the daily touring has a differing set list. The team arrive onsite around 7am and expect to be fully rigged by 2pm because in many cases the concert doors open at 4pm.  This is a slim window in which to program and test the show for each night.

Hitchcock said, “Programming the show is another test altogether and only really possible once the system is complete.  Our solution, for now, is to model the screens geometry in 3D studio Max and employ the Stage Technologies toolkit to output axis profiles and “deads” for each preset to the winches. This allows the operators to pick the presets in order of the songs and simply re-time and save as a cue.”

Stage Technologies’ Director of Rentals Services Ted Moore said “When the call came I knew this was a big ask. Delivering something so quickly that had needed to interface with equipment that had already been produced once by someone else is always a challenge, but my team delivered with dedication, hard work and professionalism.”