BROWN: Out of all the people you’ve toured with—Björk, the Beasties Boys, and Radiohead—whose fans have been the most receptive?

KOALA: I’d say Radiohead, most definitely. I’ve been listening to them since Pablo Honey, so to even have that invitation…I tried to do something that I felt, hopefully, the audience would understand. I just had a little 20-minute set to do my thing.  I remember we were in Baltimore and Colin [Greenwood] and Thom [Yorke] talked to me, “Hey, we were just wondering”— they were so polite about it—”You can say no, but we were wondering if you would be interested in playing some turntables on a couple songs with us during our set?” I said, “Excuse me,” ran to another room and jumped up and down. They were like, “How about ‘National Anthem’,” which is what they used to start their concerts with, so I was actually starting the show with them. [laughs] So many Radiohead stories…[laughs]

One time they were trying to do this song called “In Limbo” and Thom said, “Something’s wrong. It’s missing something.” I was just standing on the side, I always set up on the side and check if the needles are working, it’s not that fun. [Thom] was like, “We need someone to play tambourine…Get Koala to do it. It’s really easy, you just go ‘chka-chka-cha-chka-chka-chka-cha.'” [laughs] They took Thom’s vocal mike and pointed it sort of down to where the tambourine was, so I was literally standing in the middle of the stage—this is at sound check—in front this vast space that would be filled with tens of thousands of people. I was playing tambourine and I’ve never been so embarrassed [and] self-conscious, cause normally I have a bunch of turntables to hide behind. $3000 worth of equipment is a little easier to feel comfortable behind than this little tambourine. I’m standing there right where Tom stands and I’m like, “I’m not gonna play this right here, you’ve got to set me up behind Bill [the drummer].” [laughs]. In hindsight maybe I should have just stood there. [laughs] It would’ve been, “Who’s that Chinese kid playing tambourine?”

working on some tracks with Colin Greenwood. I’m currently in the studio using the slowest computer to… http://t.co/MsYOikTgtT 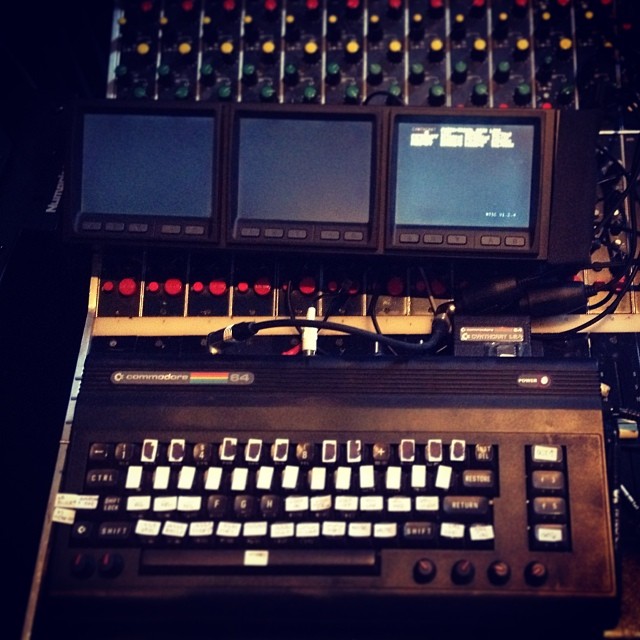