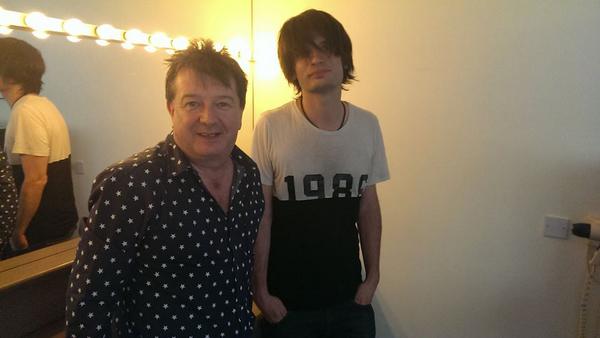 Ten minutes out of Didcot Parkway, in a leafy one-street town, sit the offices of the world’s biggest experimental glitch-rock band: Radiohead. Their awards — NME finger, MTV spaceman — clutter a corner cabinet, while shiny discs fill the walls for increasingly odd albums, from Pablo Honey (1993) to Kid A (2000) and beyond. They recorded The Bends in the basement. The band’s beanpole guitarist, Jonny Greenwood, is curled up on the sofa. He lives nearby, as he always has, and as bandmates such as Thom Yorke still do. Hundreds of magazine covers featuring the five-piece lie face up under the coffee table, and the whole place feels historic — like a museum to getting rich off ever-richer sounds.

I had gone to Oxfordshire to talk to Greenwood about his classical work — on film scores, with the London Contemporary Orchestra (LCO), various attempts to sample the symphonies of Olivier Messiaen. But let’s shove the Radiohead elephant out of the room first.

It has been three years since the last album. Is there a release date for the next? “No! Release? No, no idea. No,” he laughs. “Our plan is to start making music soon. We’ve just got to get the inertia back.” They have been in touch, though, sharing ideas. “I was emailing stuff to Thom last night, actually, but it’s not the same, is it? You don’t see him tutting.”

Greenwood and Yorke are to Radiohead what Lennon and McCartney or Jagger and Richards are to bands that need no introduction: space-cadet duos with diverse interests who push each other, and pull their audiences along, too. They joined together at school 30 years ago and, over eight albums, have passed on to fans influences as esoteric as Autechre and Flying Lotus. Sigur Ros owe them a career. Such acts sit at the obscure end of pop, yet Greenwood’s passions are for the classical extremes, and his Spotify playlist includes Krzysztof Penderecki and Henri Dutilleux. He tells a “zinger” about performing “Steve Reich in the Afternoon”. He has weird tastes and wants to try everything.

“I’m so on the edge of what I can actually do,” he says quietly, dark hair flopping over his pale face. “But that’s what I am. I’m a bluffer. When I first met Thom, he was like that as well. I remember seeing him play drums at school once, and he said, ‘Go and get a double bass. Just hit it, or whatever.’ Our approach is not to be all buttoned-up.”

Hence the LCO, a young and experimental group of musicians, led by their artistic directors, Rob Ames and Hugh Brunt. The latter is also principal conductor. Earlier this year, I saw them play at the Wapping Project, a disused hydraulic power station in east London. The crowd stood. Greenwood and a small orchestra waited in a back room. Nobody wore a suit, and most of the men had beards. We nodded along to pieces — Xenakis, new Greenwood compositions, the score for the 2010 film Norwegian Wood — that we barely knew. It was exciting and fun. More shows are planned, and nobody shouted for Creep.

“My previous experience of live classical music was that you hand in the running order for the programme notes six months ahead of time,” says Greenwood, who has also written for the BBC Concert Orchestra and the London Sinfonietta. “But this felt more like a gig. People were coming and going.” When Radiohead tour, he spends evenings off watching “strange orchestras”. He sees classical music as alive, not stuck on discs from decades ago. At one point at the LCO show, we downloaded an app that pinged when pressed and meshed with the sounds from the makeshift stage. Is such freedom only possible away from the day job? He shakes his head. “Radiohead have always tried out things that have been semi-ridiculous, and semi-successful. They’d be up for anything.”

Hail to the chiefs: Jonny Greenwood, right, with Thom Yorke at the 02 Arena (Samir Hussein)

Greenwood was born in 1971. He met Yorke through his older brother, Colin — who plays bass in Radiohead — and went on to sell out stadiums with music best described as “difficult”. He is humble, as unused to talking about himself as anyone would be having happily played second fiddle to a lippy front man. But he loosens up when the tape is off, riffing on pronunciation and how the buzz of this paper’s World Cup scoops must have felt much like he and the band did “when we released that album [In Rainbows] free”. Whenever I try to compliment him, though, he diverts it back to Yorke. “Thom just devours music,” he says in wonder. “It’s crazy.”

To try to give Greenwood his due, I email Brunt at the LCO. The guitarist has raised the orchestra’s profile, and I wonder what he has been like to work with. Radiohead are hardly the Mötley Crüe of the Thames Valley, but, you know, rock stars… “We’ve all been struck by his intense curiosity in the rehearsals,” Brunt replies, as I imagine TVs being sucked back up into hotel windows. “He’s fascinated in drawing new timbres from instruments.” At one point, Greenwood talks to me excitedly about “modes of limited transposition”. At another, he goes wide-eyed about acquiring his first ondes martenot. “It turned up in a box, and I had no idea what was going to be inside. What could be more exciting?”

He was 15 when a teacher played him Messiaen’s Turangalîla-Symphonie; at the time, he was listening to Magazine, the Fall and the Smiths, but Messiaen sounded like “two orchestras playing different things”. He became obsessed. “He was alive then, as well, and for some reason that was a big deal for me. To think, ‘OK, he’s alive in the same way Mark E Smith is alive, making records.’ I didn’t think of any of them as better or worse. I just thought, ‘I want all of this stuff.’”

The strings in How to Disappear Completely and Codex, some “badly played viola” on The Tourist, the recorders on The Bends (Greenwood played in recorder groups until he was 17) — it’s not hard to spot classical inspirations in Radiohead, but despite what some think of the band’s output since 2000, the lead guitarist says songs always come first. “You can’t shoehorn microtonal string music into a beautiful song,” he shrugs. “So Thom plays Pyramid Song at a piano, and it’s already amazing. What do you do?” Solo work? He nods.

Paul Thomas Anderson’s film There Will Be Blood opens with barren mountains and what sounds like a swarm of bees. It’s Greenwood’s “microtonal string music”, and it unsettles before, for six minutes, we watch Daniel Day-Lewis prospecting for oil. The opening ends with the same mountains, noise and weirdness. The duo’s second collaboration — The Master — is even stranger. Rolling Stone says Greenwood is “redefining what is possible in film scores”, but I don’t expect him to agree when I tell him so. “Paul just has his music very loud in his films,” he says. “It’s a dream job for a composer. I was sending him music that was too long, and he was extending the scenes to fit the music. Which is insanity.”

Next month, There Will Be Blood is being screened at London’s Roundhouse, with a live score by the LCO. Bring an expanded mind. Next year, Inherent Vice — the third film this quietly eccentric duo have made — hits cinemas. How does it work? “Back and forth for months,” Greenwood says. He misses it when they don’t work together. The new film is based on a Thomas Pynchon novel. “I was sending him this 1960s pop thing I did, because the film is set then, asking, ‘Is this of any use?’ Then I flood him with different approaches until we find the right one.” One bonus is that he gets to see eagerly anticipated cult films early. “Inherent Vice is funny,” he says. “But there’s a strange, dark seriousness going on throughout.”

Which, neatly, brings us back to Radiohead. I ask how, when he has scores, the LCO and a new album to think about, he works out which music fits where. He says he doesn’t know, but has lots of “stupid instruments”, so is unlikely to run out of ideas. But eventually, he says: “I want all of it to be in Radiohead, really.” He brings up Yorke again. Questions about the band are meant to be difficult, ones he’s asked all the time and is bored answering. But it’s what he talks about most freely, happy for the spotlight to shift. “Radiohead’s still the thing I’m most excited about,” he says sweetly. “But with time off, this is what I want to do.” 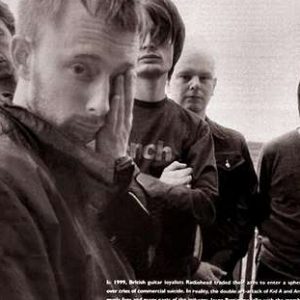