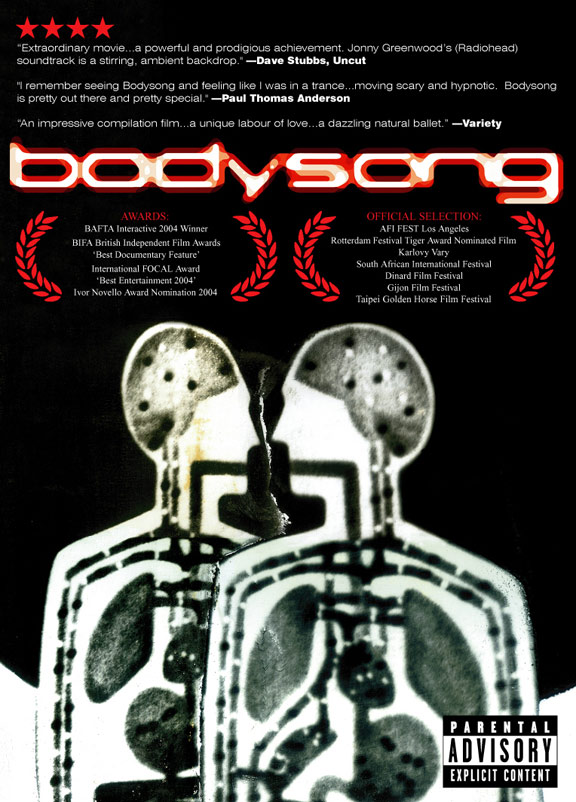 Greenwood’s music for films began in 2003 with Bodysong, a wordless documentary about human motion and activity with antecedents in films like Koyaanisqatsi.

“Jonny always wanted to go against the grain, mess with expectations,” recalls Bodysong’s director, Simon Pummell. “At one point he was looking into the possibilities of soundscapes of extinct languages. The way the percussion in the ‘Violence’ section slowly shifts into amore synchronised, obsessional beat-and moves from excitement to something oppressive, as the images escalate from brawling to genocidal brutality- is an example of the music really telling the story together with the images.”

He moved from art-house to mainstream theatres with Paul Thomas Anderson’s There Will Be Blood in 2007, with a harsh catgut accompaniment- “music about the characters and the landscape”, he says – that scaled the movie’s epic peaks and troughs with atonal introspection and wide-horizon scrape. Partly derived from a standalone commission he’d written for the BBC Concert Orchestra called ‘Popcorn Superhet Receiver’, it was a musical language of understatement.

“It’s recurring textures,” explains Robert Ziegler, who conducted the orchestra on both soundtrack recordings. “Certain clusters that he used, especially in There Will Be Blood, just nailed the quality of the film. And some of the new music he wrote, propulsive, rhythmic things, worked out wonderfully. He got that menace; on one of the most brilliant cues, “Open Spaces”, he played the Ondes Martenot [an eerie-sounding early electronic instrument] , and the whole conception of it was perfect. Those huge Texas landscapes, and it was just this little cue, but it lifted the whole film.”

I ask Greenwood whether he needs something visual as a starting point.

“Yeah,” he replies, “I enjoy having something to write the music for that’s of it not being that concrete, more an excuse to write music. My most exciting days ever are the morning of recording a quartet or an orchestra or a harp player, and knowing they’re coming, and setting up the stands and mics, and putting music out for them. And then after four hours it’s all over and you’ve got something.

“I’ve had a real soft ride. Traditionally film composers are way below the make-up people in the pecking order. It’s not seen as important, unless you find enthusiastic directors. And I’ve been lucky three times in a row.”

Is that excitement greater than coming out on stage in front of thousands at a Radiohead gig?

“Yeah, I think it is,” he says. “Because you’ve got weeks of preparation, and it’s just on paper and wondering what is going to happen. These great musicians are coming in, and you can hand them something that’s fairly lifeless and they can make it very musical. That’s been a big discovery for me you realise how much they put into it. . . they can make things sound musical even if it’s just a C major chord. It can sound far more exciting than you thought it was going to. It’s a big secret, but you don’t realise how much input comes from these people. ‘I can do this four or five different ways -which way would you like it?’ Or ‘You can get this kind of effect from the strings’, and so on.”

Robert Ziegler is in no doubt of Greenwood’s talents as a composer, citing Polish modernist Penderecki as an antecedent. “Obviously he’s got the same attraction to masses of sound and big clusters of orchestral sound. As a film composer you have to be careful not to ‘frighten the horses’ and the producers. .. ”

There Will Be Blood led directly to Greenwood’s next commission, as Tran Anh Hung used some of it as guide music on early cuts of Norwegian Wood. “When I saw There Will Be Blood,” says Hung, “I was completely seduced by Jonny’s music. It was a ‘new sound’ with a profoundness that I have not heard elsewhere in films. The emotions coming from his music were so… right, so mysterious and yet so obvious. No doubt for me that Jonny’s music would give a dark, deep beauty that Norwegian Wood needed.” Eventually Greenwood adapted another piece, ‘Doghouse’, for the finished film. ‘Doghouse’ is a triple concerto for violin, viola and cello, inspired by thoughts of Wally Stott’s scores for Scott Walker songs like “It’s Raining Today” and “Rosemary” languishing in the BBC library.