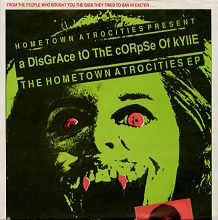 Think of regional scenes spawned by the 70s punk explosion and Manchester and Liverpool will probably spring to mini first. Certainly Exeter hasn’t features in too many histories of the era – until now, that is. An early recording by Radiohead’s Thom Yorke has beer included on a compilation that marks 23 years of Exeter-based punk and post-punk, and puts the Devonshire town on the musical map.

Released on local label Hometown Atrocities, “Year Zero” spans the period between 1977 and 2000, and features the whole spectrum of post-punk music, from mod to hardcore. Like all great punk compilations from “Nuggets” onwards, it has its fair share of students, schoolboys and adolescent malcontents bashing out their sub-three minute claims to a tiny footnote in rock history. Would-best and should-have-beens were immortalised on independent 7″ singles that now have collectors salivating. The CD also features a prime example of that other great staple of the record collector’s diet, an early recording by a now-major artist.

These days, Thom Yorke is the voice of perhaps the definitive rock band of the moment. Radiohead’s imminent follow-up to “OK Computer” is eagerly awaited, and will surely be rated as one of the albums of the year. However, 11 years ago, while a student at Exeter University, Yorke was the guitarist in Headless Chickens, whose sole release – what is believed to be his first-ever recording – appears on “Year Zero”.

Headless Chickens were a four-piece comprising Yorke (guitar and vocals), someone known only as ‘Shack’ (vocals and bass), John Matthius (violin) and a drummer called Martin. Their song, “I Don’t Want To Go To Woodstock”, is rousing melbdic punk, which – leaving aside some rather incongruous violin adornments _ is reminiscent of the Psychedelic Furs and the Alarm.

Shack sings the song, although Thom Yorke’s backing vocals are plainly audible, and the whole band are credited as song-writers. “Woodstock” originally appeared on the first-ever Hometown Atrocities release, a 7″ EP dating from mid-1989, which also included tracks by Mad At The Sun, Beaver Patrol and a band called Jackson Penis.

Some Radiohead biographers have reported that Hometown Atrocities was an anarchist collective set up by members of Headless Chickens. In fact, it was the brainchild of Mad At The Sun’s David Goodchild and Martin ‘Ed’ Edmunds, and was originally conceived as a name to promote punk gigs in Exeter. “The Headless Chickens guys were there to help out with the early shows,” recalls Ed. “They were very enthusiastic for something to happen in Exeter, but they moved on when things moved more towards punk and hardcore.”

All of the bands featured on the EP were then active on the Exeter scene, and played regularly at Hometown Atrocities gigs. The EP was recorded at Daylight Studios, in Honiton, and produced by Paul Bateman. Just over 1000 copies were pressed, the bulk of which came in a black-and-white picture sleeve. In addition, says Ed, “around 50 copies were printed in a green sleeve with the slogan ‘A Disgrace To The Corpse Of Kylie’ printed over a barely-recognisable photo of Kylie Minogue” (which was no doubt a “tribute” to hardcore legends Sore Throat’s “Disgrace To The Corpse Of Sid [Vicious]” 100-track LP).

The EP was distributed nationally and sold out quickly. Collectors who know of its existence are already paying up to ?150 for the standard version, and ?200 for the rare Kylie sleeve. However, it rarely appears on the market, and is missing from most discographies.

Thom told Ed, that he was going back to Oxford to form a band like the PIXIES.

‘Headless Chickens’ probably played no more than 20 gigs, as Ed recalls: “At first they did mainly covers. I remember they did the Prince song ‘Raspberry Beret’.” Later, a few originals crept in, including “Woodstock”, and another great song, “Atom Bomb”. Of most interest to Radiohead fans was an early version of “High And Dry”, which later appeared on “The Bends”. Rumours persist of a promo video for “I Don’t Want To Go To Woodstock”, along with good quality live and rehearsal tapes.

In all, the band lasted no more than a year. Shortly before Thom Yorke left Exeter, Ed recalls meeting up with him while the future Radiohead star was dj-ing at the University. He told Ed that he was going back to Oxford to form a band like the Pixies.

Ed later chanced across Shack while travelling in Thailand. Shack told him that Yorke’s new band had signed to EMI for a huge advance, and that the Senseless Things – whom Hometown Atrocities had promoted many times – were also signing to a major: “I rushed back to the friends I was travelling with and told them the news. Nobody could believe it – we were wondering what the hell was going on back home and what we were missing out on.”

Since then, violinist John Matthius has played on Radiohead albums and works with a band called Jackdaw Music. Shack’s current band, Lunatic Calm, has a track featured on the soundtrack to The Matrix.

Meanwhile, Hometown Atrocities remains true to the DIY and anti-establishment ethics of the original punk movement. Ed and David Goodchild’s current band, Annalise, have recently returned from Japan, where they have an enthusiastic following.

With pleasing symmetry, Muse – who sound not unlike Radiohead – secured their breakthrough last year on the back of a residency at Exeter’s Cavern Club, which is managed by Patrick Cunningham, erstwhile drummer of the Scabs, who also feature on the “Year Zero” compilation.

The shock-waves that emanated from punk’s epicentre all those years ago still continue to rock Exeter . . .