These became their first release in May 1992, “Drill EP”, promoted by dates with the likes of Catherine Wheel and Sultans Of Ping.

Abrasive and melancholic by turns, “Drill” kicked off with the punky and splenetic “Prove Yourself”, home to the ﬁrst in a long history of nihilistic one-liners that suggested Thom’s worldview was one of genuine self-loathing rather than bathetic self-pity. “I wanna breathe, I wanna grow/I’d say I want it but I don’t know/I’m better off dead”. As with similarly sensitive soul, there was little doubt it was 4 Real.

Around the time “Drill” came out, it was agreed that Radiohead should record a couple of numbers with Boston producers Sean Slade and Paul Q. Kolderie. These were the spacey, U2-esque “Inside My Head” and “Million $ Question”. They decided to warm up with a new Thom composition, “Creep”, a whimsical ballad of amazing fragility. Thinking it a little too twee, Jonny decided to sabotage the chorus with crunching metal guitar whiteout, signposted with that now-infamous, muted, two-stroke K-RUNK!! Unbeknown to him, the tape was rolling. He had just ensured Radiohead’s immortality.

Only it didn’t quite happen like that. “The sales were really disappointing. It got to, what? No. 78?” says Hufford. “We thought we’d be on ‘Top Of The Pops’ but it wasn’t to be.”

Interviewer: “Now, your demo’s been released in May of ’92 as an EP called Drill…”

Interviewer: “…if I have all my information right. Tell me about that experience of, really, your first experience making an actual record that, you know, went out to the public.”

Colin: “Well, half of that record was never supposed to go out to the… er… wasn’t going to go out to the public in such a big way, because we were going to… like some of the tracks on Drill were like original rough demos that we’d done originally to… well, the original plan – before we signed to EMI – was that we were going to release a single on an independent label, funded by like the people who eventually now manage us. But there was so much interest from those initial recordings that we never got around to funding our own single, we ended up being funded by EMI.”

Colin: “Yes. So there are four tracks on that single… on that EP, and it’s very er… basic and rough, it’s quite rough, isn’t it?”

Thom: “Very, very difficult to get hold of.”

Colin: “Yes, it’s very hard to get hold of. It was a big learning experience record in terms of artwork, and organising layout, picture design…”

Colin: “And we paid a stupid amount of money to get a design company to do the sleeve, and…”

Thom: “The whole thing was like a big shock to the system.”

Thom: “And the best bit was, erm, they lost the first three thousand copies they’d pressed. They lost them.”

Interviewer: “They lost them?”

Thom: “They lost them, and they had to delay the release by two weeks, it was like ‘this is getting really silly’…”

Interviewer: “How do you lose that?”

Colin: “Ah, there was a warehouse with millions of Iron Maiden records…”

Thom: “Yeah, and it all went down. It was supposed to be automated.”

Thom: “And they did press a… no, saying that though, the actual physical record was getting out… there was a promotional one going around that said ‘Radiohead Drill’ on it, but actually had Joe Cocker…”

Interviewer: “Why? It just…”

Colin: “It was the wrong… because he’s on EMI, and they just pressed it wrongly.”

Thom: “Printed it, or whatever.”

Interviewer: “You didn’t have a good first experience there, did you?”

Thom: “It was quite spectacularly bad.”

Colin: “No, but it was a good learning experience, I suppose. I mean it sold quite well for England. I mean, if we’d have been in the independent chart, which is kind of like the alternative R&R chart here, it would have been top five.”

Colin: “So, but I mean it was a major chart, it’s like Billboard, so it was like seventy two, seventy something, but it’s still quite a good debut…”

Interviewer: “Was money coming in, I mean, were you making a living doing this when you were selling that?”

Thom: “Oh, it never works like that. Record… the record business doesn’t work in terms of bands making money.”

Thom: “Yep. Your life is offset against your loan. So it’s like taking out the most hideous mortgage of your life, creatively speaking.”

Colin: “It was put really well by this guy, Sean Slade, who co-produced the album, and said… and compared like getting a loan from a record company with getting a loan from a bank. So you get a loan from a bank, if you can persuade them to lend you, say, two hundred thousand dollars for a year, like a record company advance and they’d like charge twelve percent interest on the loan, or whatever. Once you’ve paid… if you pay the loan back, then you don’t have to pay any money after that, whereas if you’re like lent two hundred thousand pounds from a record company, then after that, the money that you earn is just the twelve percent, so you don’t actually (laughs), you know, make any profit.”

A band I haven’t seen yet, despite their support on the Catherine Wheel tour, but the ‘Drill’ EP has endured two weeks on the old stereo without losing face. Does this mark the dawning of the post shoe-gazing era? ‘Prove Yourself’ starts with some deceptively winsome vocals, before exploding into a monster headache, while the other three tracks encompass elements of Moose and House of Love, before springing off with the thrashy, disposable ‘Thinking About You’.

Gary Davies: I love that band. I think they’re just fantastic. I’ve always listened to every new record that came along and always tried to pick songs that stood out and were really different. Over the years, I’ve been the first to play Duran Duran, U2 and Chris Rea among others. When I heard that Radiohead record it was so different and fresh, I didn’t know anything about the band – it just sounded great, so I made it my “happening track of the week”. It didn’t happen? No, but the band did. Years later I bumped into one of them, can’t remember which one, and he said, You were the first person to play the record – not John Peel or the Evening Session guys, which I didn’t know. I did feel very proud. It’s very nice that he remembers.

Ed O’Brien: We were completely excited. It was a mainstream weekend DJ on the national radio station. Some of our friends in Oxford phoned us up and said. You were played at eight o’clock this morning on the radio and they’re going to play it again on Sunday. We all tuned in and listened to it. It was wonderful.

Keith Wozencroft (then A&R, Parlophone): It didn’t feel like a credibility knock at all. I didn’t have a radio in my house at the time, so I had to go down to my car at eight in the morning on a Saturday just to listen to it. It was a wonderful moment.

Colin Greenwood: [The group try buying a copy of the Drill EP themselves]. We all walked into a record shop in Nottingham. The guy behind the counter said. Don’t worry man, we’ll give you one. We said, No, we really want lo buy one. He said, look the record company’s just given us 20 free ones and we can’t shift them. Not even for 99p. So you might as well have a free one. We were very depressed.

Keith Wozencroft: It never occurred to me it would do that well (Drill reached Number 101 in the UK singles chart]. There wasn’t such a pressure on first releases back then. So that was regarded as a success. I bought a few copies of it myself, as well. 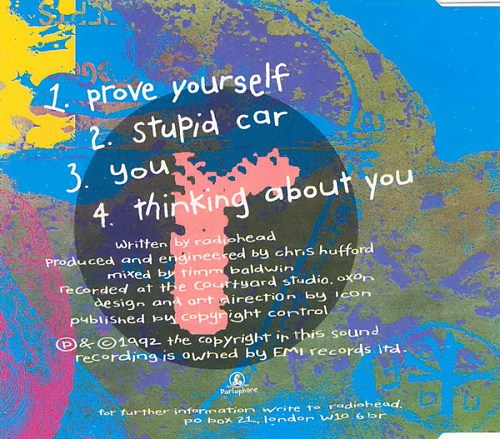 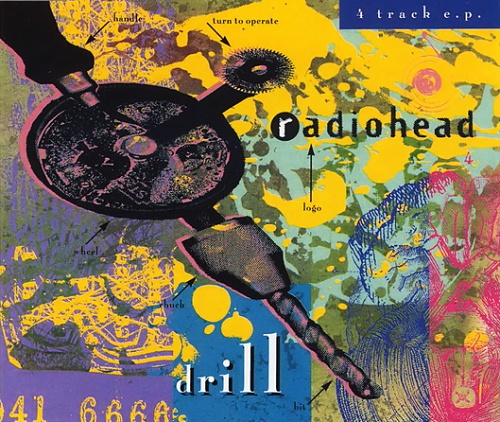