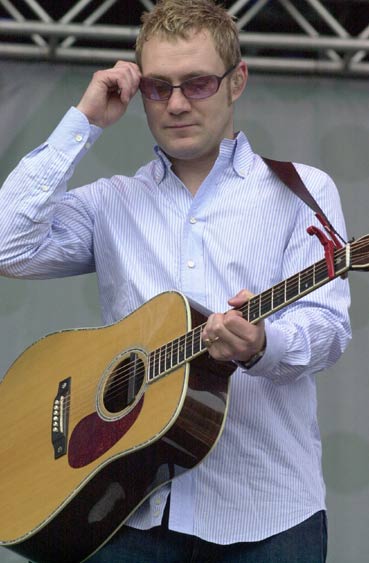 
Q Awards 2001Â : « Apparently you smashed up your dressing room when you supported Radiohead in tour in 1996. What happenedÂ ?
DavidÂ :Â«Â  I was in Toronto. Wa went berserk in their conference and ran around like dogs on all fours, jumping into all Radiohead photos. They seemed to think it was really funny. When the party move back to their dressing room – weâ€™d already ruined ours – we emptied all the ice onto the floor with all the crips. Apparently, when we left they cleaned up after us because they felt so embarassed. They were very nice about the whole thing.Â Â»
La mÃªme anecdote a Ã©tÃ© racontÃ©e depuis avec un peu plus de dÃ©tailsÂ :

David Gray â€œI did an awful lot of support tours, all around America mandy times, and the UK, and they were often bloody miserable experiences. Radiohead were the exception in that they were incredibly thoughtful about making sure we got soundchecks and just looking after us generally. There was such a good bibe about their group of people that the tour was a real pleasure. They were a band that were coming into their own, we watched them develop from nervously playing The Bends when Creep was still their only big hit on the first tour. Then, by the second tour, they were in a nother gear, there was a confidence about them and they knew theyâ€™d managed to wriggle free of the whole Creep issue. Thom was writing the songs for Ok Computer and playing them during soundchecks. There was a proper camaraderie about it. It was really good fun. There was a particularly insane night in Toronto when they were being presented with a platinum record aqnd their whole record company were there. I dunner where mine were, or even who they wereÂ ! But after the show, at that time we were into a vodka and cranberry regime and weâ€™d caned our entire rider but the time theyâ€™d finished their set. The venue itself was like a labyrinthine succession of clubs and we ended up tumbling into their presentation. We were running about the place, barking on all fours getting in their photos, they didnâ€™t seem to mind. It ended up back in their dressing room. Weâ€™d already emptied all the ice out of our room covered it in crisps and round it was spectaculary good for moon walking. So we moonwalked into theirs and did the same. Ice and crisps everywhere. Brilliant fun, but a hell of a mess. And later we heard that Radiohead cleaned the place up after weâ€™d leftÂ !
Ces deux citations tendraient presque Ã  le faire passer pour un sale gosse, pourtant, il ne lâ€™est pas forcÃ©ment. Depuis le succÃ¨s de lâ€™album White Ladder en 2006, il connait un beau succÃ¨s aux Etats-Unis.